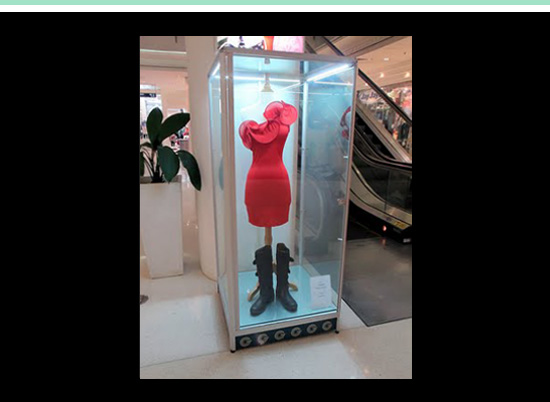 Most of Westfield Sydney is now open for business after a dribble of store openings from earlier in the year. Much ado has been made of never-before-seen-in-Sydney stores making their debut, with perhaps Zara being the most eagerly awaited. I took myself to Zara and was astounded by the frenzied shopping activity taking place there. Check-out and  changeroom queues were very long and people seemed to be grabbing whatever they could. It seemed as if the world may be ending and if you didn’t buy something now you’d be left naked later. I heard a woman ask a couple of random young men if the sizes were accurate. They seemed confused by the question but answered nevertheless saying that the sizes did seem accurate effectively sending the woman off in spin to grab even more clothes for a presumed army of men she had waiting at home.

I ventured deeper into the megamallopolis intrigued by how dark and cavernous it seemed, yet glamorous all the same. People bustled about from floor to floor eager to see what was on offer - same old same old for the most part. Shoppers were certainly buying - except for in Maggie T where a rather bored sales assistant was glued to the phone with not a customer in sight, and perhaps there hadn’t been one all day. I pondered why Leona Edmiston appears to have signed a lease for a broom closet while the normally cluttered JB HiFi seemed to have taken a more minimalist approach, or they hadn't unpacked everything yet. I wandered aimlessly for a while longer noting that a good number of husbands were sleeping in the few comfy seats situated around the galleries. Time to go and wonder whether bigger is better. Westfield Sydney has sucked up and transformed the former Centrepoint Centre, Imperial Arcade and Skygarden leaving the poor old Glasshouse (above) alone and lonely; barely a soul walked its boards that day.
Labels: Popcorn, Sydney Posted by David Wills at 10:33