Roaming. There's Much to Laugh At. 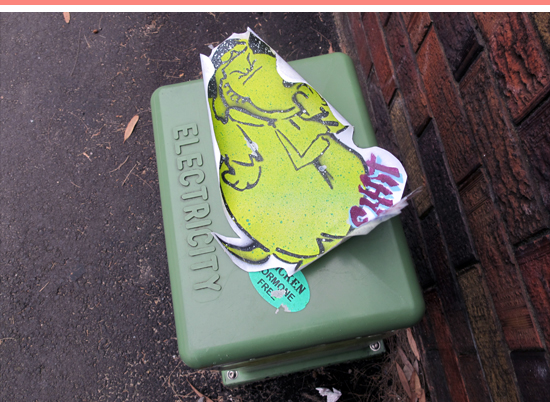 The graffiti on Newcastle's streets comes in waves, with King Street a popular target. It seems that new trends emerge overnight, leaving little time for the graffiti artists to get their tags down. There have been idiots, toasters, the word annoying - sometimes aptly placed - bread tags, various paste ups including the three man and now stencils of scissors and bicycles. Muttley's made an appearance too. I'm wondering if he'll become a fixture...
Labels: Newcastle, Roaming Posted by David Wills at 20:04 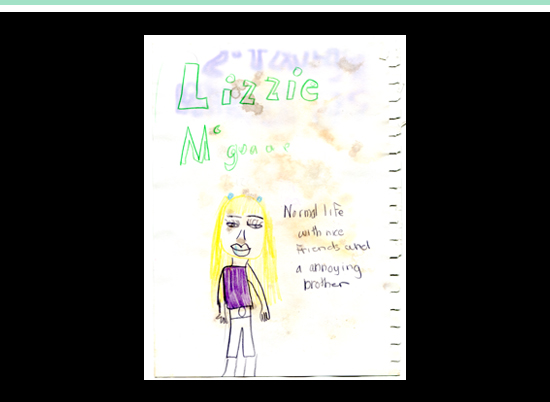 There must be lots of kids in Canberra, it's where I found lots of drawings. Despite an annoying brother, Lizzie here is enjoying a normal life with nice friends.
Labels: Found Posted by David Wills at 21:45 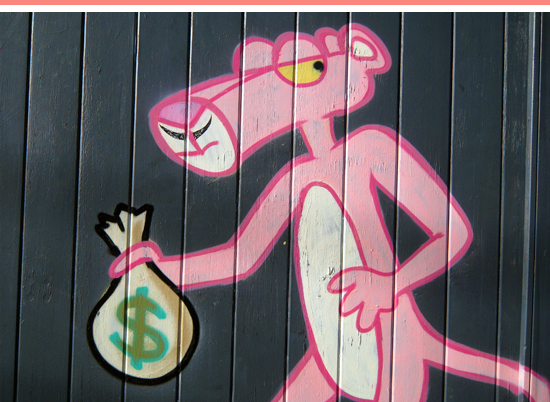 It's a Sunday morning. From my studio I've been treated to the sounds of a saxophonist playing Careless Whisper, the Pink Panther theme and other saxophone classics we've all come to love. A blue kombi slowly passes, its iconic sound conjuring visions of an easier life, coasting. Yesterday, the aural pleasures were quite different. A rare pair of bogan banshees were fighting, or perhaps mating, it was hard to tell.
Labels: Newcastle, Roaming Posted by David Wills at 21:36 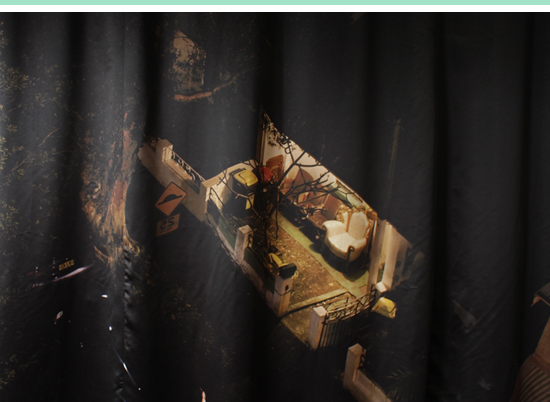 Normally the word Neighbours sends a shiver down my spine, and it has something to do with an antipodean soap uncomprehendingly adored by the English. In fact, it's completely unfathomable how anyone could like that show. Thankfully Rebecca Shanahan's new work Neighbours has pulled up to the bumper; the word neighbours can stand up with pride again. When darkness falls Rebecca hops on her bike — fitted with hi res camera — and steadily rides past the windows and doors of her inner city street's neighbours. It's a whimsical piece, perhaps a little wrong, and therefore very right. The inner voyeur in us all is satiated through this pondering of the public and private space in an era of unimagined surveillance. Showing on a small screen TV at Rozelle's Eastern Bloc Gallery, Neighbours was accompanied by the largest photographic curtain ever seen (above). Sheer brilliance. Alongside Rebecca's work was Damian Dillon's evocative, and somewhat foggy photo-collage of suburban Rockdale, making their Interzone show the first great show of the year.
Labels: Art, Art Martha, Photography, Sydney Posted by David Wills at 22:49 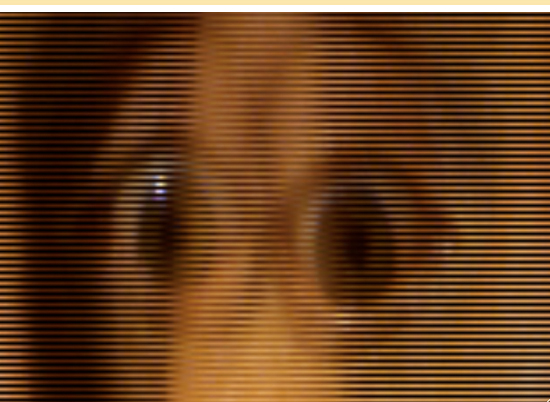 Sometimes my laptop camera malfunctions mid-chat on Skype. The video image flips out with weird and wonderful things hitting the screen for both chatter and chattee to make sense of. As quick as a cricket I try to grab as many frames as I can before things return to normal. I wasn't quick enough this time, but I do like the alienesque quality of this shot.
Labels: Art, Pinboard Posted by David Wills at 22:26 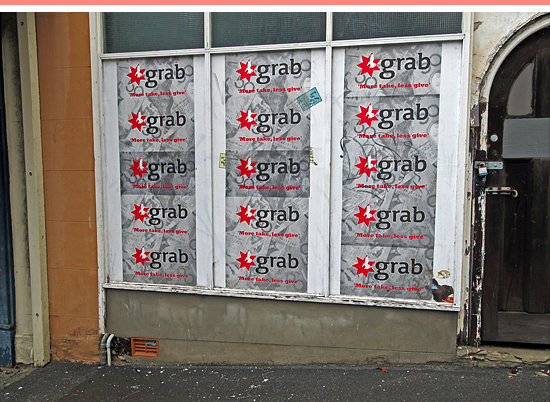 I was walking briskly to the train, fearing I may miss it and be late for work. Laden with bags I glanced just behind me and noticed the security guard outside the Westpac bank touching his toes. On closer inspection, I could see he was multi-tasking. He took a drag from a cigarette as he bent over. Still on the bank theme, the work above is surely Mini Graf's.
Labels: Newcastle, Roaming Posted by David Wills at 22:58 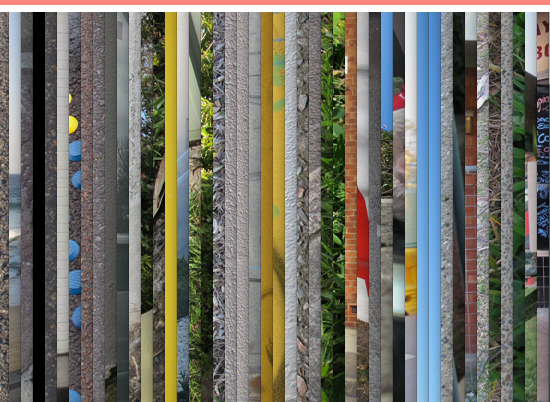 I like to make Photoshop work. When I'm selecting files to add to Turnstile, I often open fifty or more at a time. As the files open a pattern forms. Here's a grab of files from a Newcastle batch process.
Labels: Art, Newcastle, Pinboard Posted by David Wills at 21:34

Spin. Back to Work. 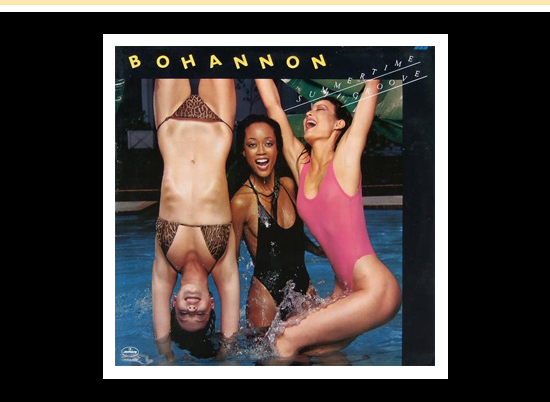 Ever since I went back to work a few weeks ago, I've been mining my music collection for inspirational tunes to kick me swiftly into gear. I rediscovered Hamilton Bohannon's Let's Start the Dance, an infectious disco dazzler repeated almost to ad nauseum, well at least for my neighbour. Grooving seventies sounds soothe with Joe Tex's Congratulations, Abba's I'm a Marionette and Henri Schwartz's take on Womack and Womack's Conscious of my Conscience. Grace Jones pops up with Breakdown, Patsy Cline takes things briefly back to the 1950s with Ain't No Wheels on this Ship while Ghoul's Lodum (Rising) is as close to the current year as I get with this Mixtape. The dancing continues with Zoot Woman's bouncy Seven Days and Echo and the Bunnymen's The Cutter, but after Nina Hagen's Atomic Flash De Luxe, the pace begins to slow, sort of. Two acts that never disappoint are Queens of the Stone Age and Aimee Mann, both slated to have new albums this year. The stunning Make it Wit Chu and the superb Superball, Queens and Aimee respectively, easily make this playlist. Which leaves Jenny Wilson's fabulous Bad Waters from Hardships! though the version I'm loving this time round is the reworking found on Blazing 1. And lastly, German band The Notwist with Pilot, a beautiful slice of melancholic electronica. So there it is, a set of strong and inspirational tracks for what's going to be a tremendous year.
Labels: Music, Newcastle, Spin Posted by David Wills at 22:30

I adore magazines, always have and possibly to the point of obsession. My tally for February so far stands at 108 issues, at a retail value of $777.80 weighing in at 37.05 kilograms. Sure, there is a major artwork in the pipeline, with magazines being a fundamental element of that project. All magazines are fair game, the broader the range the better. For example, this month I've scanned and pulped Ita (yes really), Vanity Fair, Wallpaper* and Oprah. I've started on a stack of rather cool, and sometimes sexist, 1960s Art Direction magazines and have just finished with The Pigeon Fancier. I'm rather fond of the much maligned pigeon, learning this week that the reason we don't see baby pigeons, and hence they have no cute factor, is that they leave the nest fully fledged looking like all the others. The youthful ones are easily identified once you know what you're looking for, a few yellow feathers around the neck. On the topic of magazines, Alana House has written a rather prescient piece on her blog House Goes Home about celebrity.
Labels: Flipfactor, Magazines Posted by David Wills at 23:51 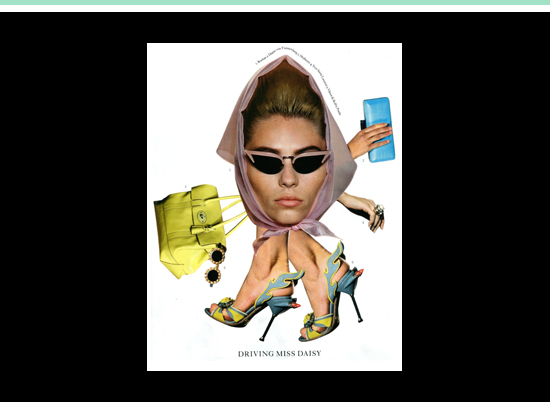 I'm not a fashionista, but I adore Elle Collections. I was quick, and perhaps a little bit cheeky, to ask a friend stranded in London due to freezing weather conditions, to grab me a copy before coming back to Australia. Thanks Jane. Like issues before, this one hits the spot. Not only are they right on trend with deco inspired typography, but the accessories pages are littered with cool collages like the one above. I love those Prada heels.
Labels: Art, Collage, Flipfactor Posted by David Wills at 21:58 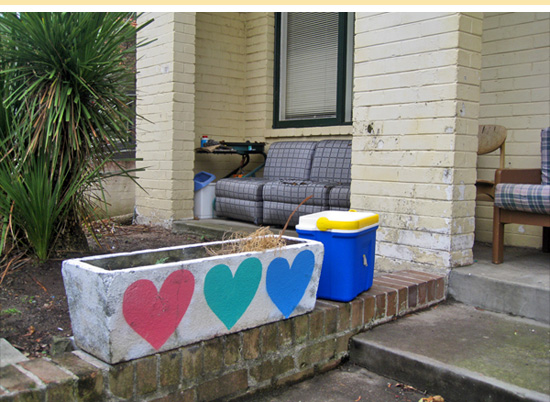 I've been flipping through old Martha Stewart magazines lately. A fact in the February 2008 issue caught my eye. According to Martha, in 2006 an estimated $16.9 billion was spent on flowers and gifts for Valentine's Day. My local flower man confirmed this noteworthy figure. That's a lot of roses, but perhaps not as many broken hearts. Though I imagine there may be quite a bit of unrequited love out there. Meanwhile, leaplings get to celebrate their birthday later this month.
Labels: Popcorn, Sydney Posted by David Wills at 23:18 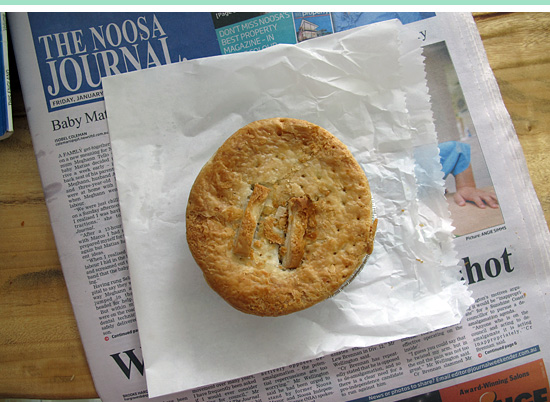 I can't remember what flavour this pie was, possibly mushroom. The only impression the pie left was on the roof of my mouth, where it clung uncomfortably for the rest of the day. It came from a Tewantin bakery on the last day of my holiday. I recall the rain had started, few people were about and that the town was quite unlike nearby Noosaville or Noosa Heads.

Found. What Long Legs You Have. 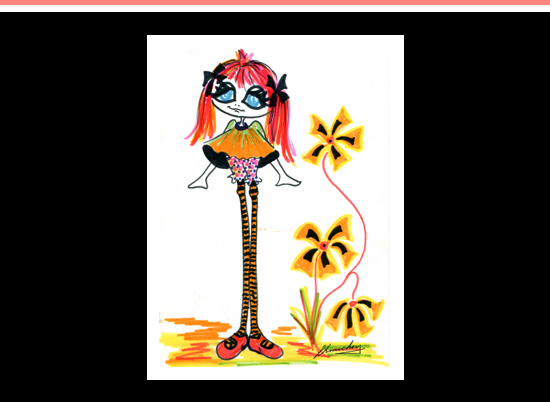 It's not everyday you find a beautiful drawing of a young girl with extraordinarily long legs. And it may surprise that such a find came from Canberra several years ago.
Labels: Found Posted by David Wills at 22:45 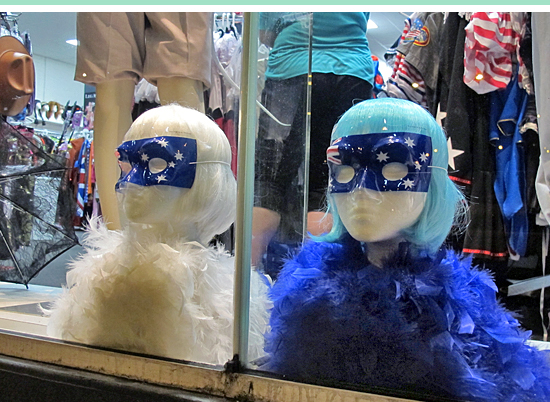 A former Queenslander was bemused when I showed them a recent copy of Monocle, Tyler Brûlé's business and culture tome for the well-heeled. In the issue Brisbane's suburb Woollongabba — well known as the Gabba and possibly the capital of cricket — was number one on The Monocle 100 list of favourite spots. It seems to me that Woollongabba has some way to go, but has made a good start. In a way it's like Newcastle, the potential is great but the journey ahead is long. Newcastle could speed things up by ditching the current council. Despite the outstanding work of Renew Newcastle, the state of the city centre is shameful. And then there is the recent fig debacle.
Labels: Roaming Posted by David Wills at 22:20 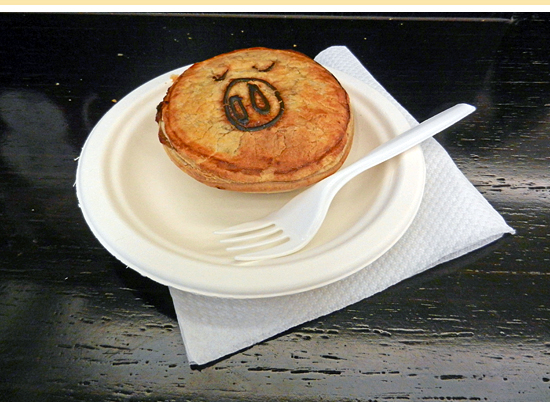 The face on this pie looks a little piggish, perhaps alluding to the rather delicious content hidden within. I'd forgotten to eat before boarding the train to Sydney, and so when I arrived I was famished. I'm not one to eat from a fast food chain, but Pie Face was the first eatery I saw with any nutritious potential. I chose an experimental Pork and Apple pie, something I'd never heard of before, and I have to say it was tasty. Slightly peculiar I'll admit, but yummy nevertheless. How did it fare? 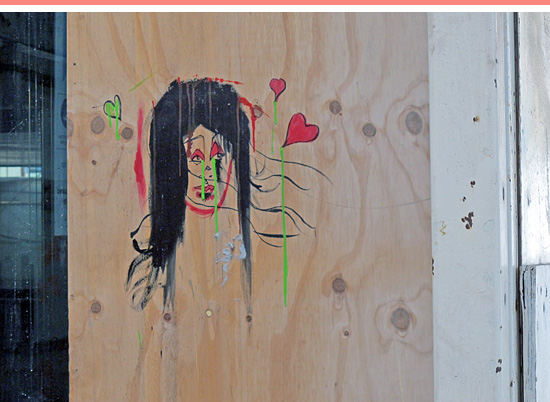 More goodness from Brisbane, this time street art on a work site hoarding. Hidden from general street view, this beauty stared out lovingly to anyone who'd make an effort. I quickly snapped her as surly workmen looked on disapprovingly.
Labels: Roaming Posted by David Wills at 22:31