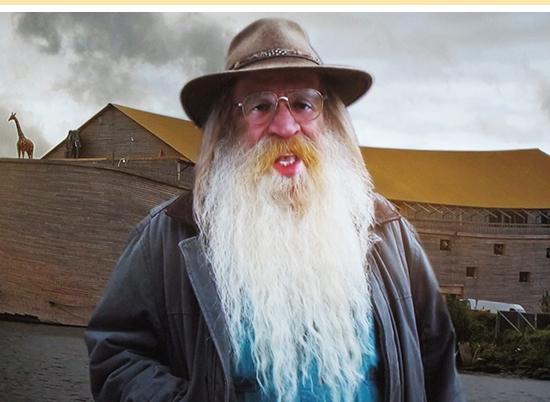 The mammoth Noah's Ark in Dordrecht is more a work of art than a museum, not to mention an intriguing and surreal experience. Its imposing facade conceals a maze of rooms and stairways spanning at least four levels. Inside, an array of life-size plastic animals make their home alongside live exotic birds, rabbits and ponies. Mannequins, seemingly unwanted by local retailers, are dressed as if at some hippie party, many in rave-like dance poses. It's rather amusing.

Noah (pictured) was rather odd too. He spoke Dutch with a thick American accent, and his attire seemed somewhat modern under his beard. Elsewhere, a voice on a nearby television screen lectured on Creationism, and how only an academic would be arrogant enough to not believe in it. Though the ark can hold 3,000 visitors, I counted just five people in one American family on the day I went, not including staff. The adventure was made all the more eerie with so few people around. I was startled by flying white doves at first, but soon felt at home with them. I felt sorry for the poor labrador who lived in the largest pen with a plastic mate. He seemed eager to get out following me from side to side behind his fence. I'd want to get out too, the stationery moose, mammoth, adders and casowaries gave me the heebie-jeebies. Other animals included dodo birds, komodo dragons, pigs, sea lions but only two dogs, as all dog breeds could be recreated using these specimans when back on dry land. It was a mind boggling experience, and I spent a surprising three hours on board.

It was snowing the day I visited, so I wound my visit up in the café eating a warming pea and ham soup with an Egyptian Queen and her dog. See Noah's Ark on Turnstile.
Labels: Art, Art Martha, Dordrecht, Netherlands Posted by David Wills at 08:15