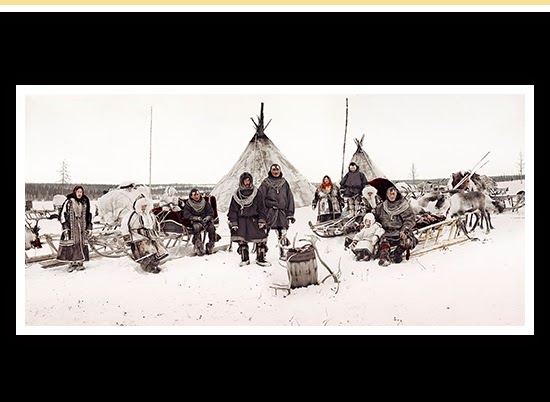 I think I've just seen my favourite exhibition of the year, Leve de Mens! at the Rijksmuseum Volkenkunde in Leiden. It's the work of Jimmy Nelson, someone I've not heard of before, who has travelled the world to document fading culture in remote communities. From the first step you're confronted by evocative imagery projected onto large screens as a sombre soundtrack makes the outside world disappear from consciousness with darkened gallery rooms adding to the atmospheric vibe. At this point you're not aware that the real work is still many rooms away. The second room features a ring of small screens showing what is effectively a making of documentary. You're treated to interviews, snippets of video and out takes. Oddly engaging. Watching people interact, completely absorbed in what they're watching was as beautiful to see as the work itself. At one point I felt as if I would melt — I can't believe I've just written that, but it's true.

A corridor featuring images from the museums collection of tribal photographs from around 1870 to 1890 is truly fascinating. Stereotypes are called into question with a text-based wall posing questions on the role of photography just before a gallery of images reflecting on these points. I felt a little unsure, it seemed trite and clichéd. Was it trying too hard? Or not hard enough? Why were certain images included here, including a couple featuring the photographer himself? Attention to authenticity? A little debate ensued with my companion (their favourite image was from Vanuatu), more images pondered, more questions left unanswered yet discoveries made. Another room, this time circular with LED screens projecting an array of changing portraits stare intently at us the audience sat on swivel chairs watching them.

The final rooms featured very large portraits of the tribes. The one above, The Nenets, very nearly brought me to tears. Why? I'm not sure, but I couldn't stop looking at it. Completely rapt. I don't think I've felt as moved by an image as I did with this. Maybe it's where I am at right now? I wonder whether I've felt happier or more secure in myself than I do right now, and yet I have no idea what the future holds. Maybe an exhibition is made not by what is presented, but what we the viewers bring to it. Do we bring along our own pre-conceived ideas of what we should see or feel perhaps influenced by others or do we let go and feel for ourselves. I let go yesterday, finally. It seems apt that the accompanying book is called Before They Pass Away. Leve de Mens! is on until 7 September. It's beautiful, flaws and all.
Labels: Art, Art Martha, Netherlands, Photography Posted by David Wills at 13:08