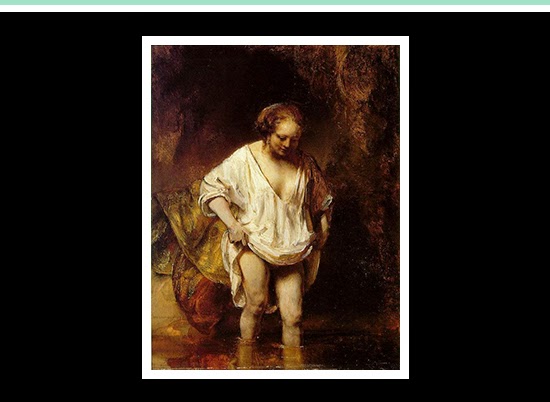 Amsterdam's Rijksmuseum plays host to Late Rembrandt, an exhibition title leaving nothing to the imagination. Featuring around one hundred works from the latter phase of his career, it's a terrific survey of his skill expertly presented. As impressive as the paintings and etchings were, I found it far more compelling to watch the audience.

The gallery was packed despite a high €25 ticket price for a timed entry system, which I naively assumed would equate to a better viewing experience; it didn't. It was virtually impossible to get up close to a painting requiring a battle-like effort to beat away: headset wearing browsers eager to beep QR codes; point and shoot photographers hogging prime viewing positions as they captured out of focus images of the paintings before them (why not buy a catalogue?); and hordes of people with walking sticks protruding from odd angles used to prod others away. Call me twisted, but I took great pleasure in watching the watchers. One fellow in particular caught my attention: well into his eighties with a killer comb-over, he wheeled his wife around the gallery. He seemed oblivious to others as he banged her wheelchair into them to ensure his wife could see the paintings. Fascinating. Image: A Woman Bathing in a Stream, 1655.
Labels: Amsterdam, Art, Art Martha, Netherlands Posted by David Wills at 13:31